This is a sample guest message. Register a free account today to become a member! Once signed in, you'll be able to participate on this site by adding your own topics and posts, as well as connect with other members through your own private inbox! 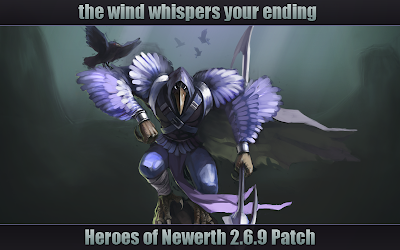 
- Added new Match Rewards System
* Players can dive into the new Match Reward System with Game HoN, a week-long event that will offer special, in-game prizes based on the number of games played.


- Fixed Heroes disappearing if you reconnected during loading
- Fixed the Mentor's cursor hanging around after the game was over
- Sounds are now dampened when a Taunt is playing
- Fixed an item-ordering problem when the courier is delivering
- Fixed a bug when the courier delivers an upgradeable item and one other item to a hero that has a recipe for that upgradeable item
* Before, the recipe would be consumed and no upgrade given
- We now prefer to upgrade items over forming new ones
* Example: Getting a Spellshards recipe into an inventory that has Spellshards level 1 and an Arcana will always make a Spellshards level 2, instead of two Spellshards level 1
- Ignore and Banlist should work properly again
- Language defaults to English if no language is set
- Fixed occasional ingame crashes
- Fixed HoNTV in D3D9Ex video mode
- "New" items can no longer be right-clicked or combined in tournament mode
- Negative Armor effects now correctly show up on tooltips
- Fixed the Courier still belonging to the owner when the owner terminates
- You can no longer disassemble items if you don't have stash access
- Fixed incorrect purchase order of recipe items with sub-recipes
- Fixed being able to use items from your stash


- Frostburn/ Icebrand: Fixed a bug where Ranged attacks were not increasing the power of the snare if the remaining duration was greater than 1.5 seconds


- Berzerker: Carnage now correctly reduces various stun durations
- Dr Repulsor: Can no longer roll 3d100 and magically hit the perfect odds to instant kill a hero all the way across the map
- Gauntlet: Grapple can no longer shoot behind him
- Draconis: Fiery Barrage 's timer doesn't show "0.0s" all the time anymore
- Devourer: Hid a state that is only for timing
- Electrician: Energy Absorption 's icon fixed when using Demonbuster Electrician
- Gladiator: Call to Arms icon fixed when using Gladius Beardicus
- Kinesis: Telekinetic Lift and Mass Control timing states hidden on creeps
- Plague Rider: Contagion and Plague Carrier 's icons fixed when using Frost Rider
- Nymphora: Turning on the "no-help" feature now makes you an invalid target for Nymphora's Teleport
- Kraken: Release the Kraken! fixed so it does not play an effect through fog
- Kraken: Tsunami Charge fixed so you can crash people against invulnerable buildings
- Ophelia: Fixed an invisible gadget that you were able to tab to
- Madman: Berserk idle animation no longer continues once it expires
- Maliken: Sword Throw gadget is no longer able to be tabbed to
- Gemini: Fixed so items delivered from a Courier so that autocombine will work properly when Gemini is in Fire/Ice form
- Monarch: Noxious Cloud fixed so it plays the proper sound
- Monarch: Noxious Cloud visual effect tweaked so it is more accurate when compared to the actual AoE
- Monkey King: Heavenly Vault fixed so vaulting while being teleported doesn't snap you back to where you were
- Silhouette: Log Bolas fixed so it no longer plays through fog.

Before sending all your money to Gaben, please support the Heroes of Newerth Store.